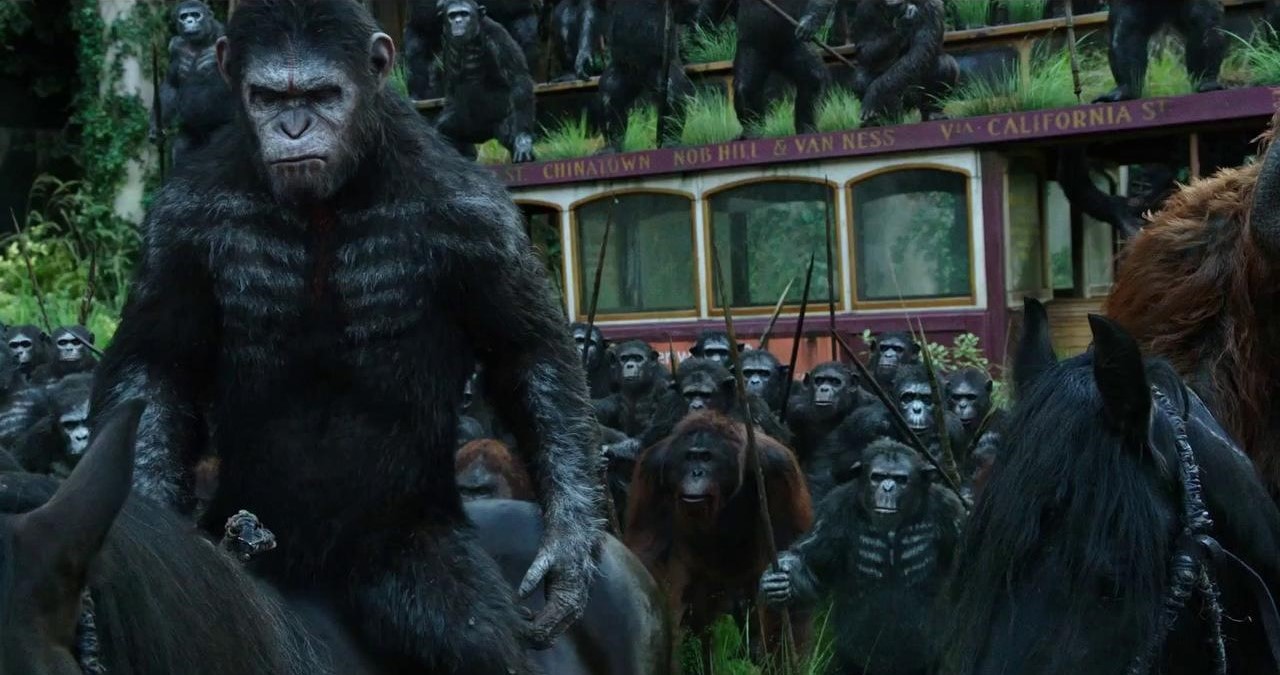 Super late to the party, but I finally got around to watching Dawn of the Planet of the Apes (2014), and wow was that movie so much better than I expected.

I was very lukewarm on Rise of the Planet of the Apes, which I think had as much to do with my not really caring for James Franco being the human touchstone of the movie as it does not thinking that the technology was quite there to convincingly render Caesar as a photo-real chimp, with all due respect to the great Andy Serkis who was very much the emotional core of that movie.

My opinion completely changed for Dawn, which managed in my opinion an incredibly photo-real Caesar in the first moments of the movie, and then it went on to further impress me with the development of every single ape character and their society. Their use of limited guttural English (pretty much only used by Caesar and Koba and primarily sign language to convey dialogue along with the incredibly emotional performances captured by Serkis and the animators completely sold me on this society. And it was the first Planet of the Apes movie I though did an excellent job handling the themes of ape vs human society (and was probably the first legitimately great Apes movie) since Escape from the Planet of the Apes. I might even say Conquest of the Planet of the Apes as far as seriousness of theme, but even that movie is super grim and super dated.

I have a complicated history with the Planet of the Apes movies. The first time I saw the original Planet of the Apes (the 1968 Charlton Heston movie), I was about 10 and still young enough to not be spoiled by the twist ending, and I was completely blown away when (SPOILERS) the very last shot of the movie reveals the Statue of Liberty and that Chuck Heston was on Earth the entire time! I can’t remember if I’d already seen Spaceballs, which parodied that shot, at that point in my life, but I’m pretty sure I’d seen the iconography. I just didn’t know what it meant yet.

I always though that twist was pretty brilliant for a couple reasons. First is that a good deal of the movies story and themes are built around the slow reveal that intelligent humans once existed on this planet of intelligent apes, and the primitive tribes of humans that the apes hunt and enslave were somehow a de-evolution of humankind. As a stranded astronaut separated from his crew, Heston’s primary struggle is to prove to the apes that he is intelligent and deserving of dignity from the apes.

The second reason is how the movie subverts and completely destroys a long standing trope in science fiction, particularly on-screen sci-fi, in which a society on an alien planet speaks and writes the same language as the traveller from Earth. In reality, it makes no sense why Heston, again a trained and educated astronaut, would so easily accept the Apes could speak English. Not just, “It’s so strange that apes can talk” but “How did these alien apes learn a language from Earth?!” The original novel by Pierre Boulle handles this pretty easily by the main character having to struggle to learn the apes’ language. So when it’s revealed that he’s been on Earth the whole time, it’s a shocking twist, but it completely makes sense from the events of the movie leading up to this point.

Beneath the Planet of the Apes (the 1970 sequel to the Heston movie) is just not a good movie. It tries to be profound in a way similar to the original, but just comes off as a cheap sequel and is honestly pretty grim, which was keeping with most sci-fi of the late-60’s/early-70’s. It starts to pick up where the first movie left off, but Heston immediately disappears only to be replaced by knock-off Chuck Heston, another rugged astronaut from an apparent second mission that followed Heston’s crew into space. And he’s looking for Heston for some reason (rescue mission, I think? I honestly can’t remember). Whatever it is, he does a crap job of it.

Much of the plot of the first movie is repeated, only this time a society of mutated humans is discovered underground and the apes decide to venture into the forbidden zone, despite it being forbidden and completely irradiated, but I guess Dr. Zaius just kinda forgets all that between movies. And at the very end, imitation Heston finds real Heston in the underground human jail, and there’s an inkling that the movie might actually get good just in time for it to end, but the apes attack, Heston is killed, and in his dying moment, like Alec Guinness at the end of Bridge of the River Kwai, he falls on the trigger to the Alpha-Omega nuke, and Earth is vaporized. And… that’s the movie. Yeah.

Escape from the Planet of the Apes (1971) is much better. There’s some handwaving in the beginning how Cornelius and Zira managed to escape Earth in Heston’s crashed spaceship and the nuclear explosion somehow propelled then back in time to the 70’s, but it plays the sci-fi story of outsiders in a strange land on its head in a clever way. While they are first treated as celebrities (Wow! Talking, sophisticated apes!), it also slowly builds the cultural and paranoid threat that apes are going to take over the planet from humans, and it does it in a smart way. It’s not just people being racist against apes, though there is some of that, there is literal proof because of the events of the previous films and how they got there. Cornelius and Zira might not want to start a revolt, but future apes, perhaps descended from any intelligent ape progeny Cornelius and Zira might produce (Surprise, Zira’s pregnant!), definitely will. Otherwise C&Z wouldn’t exist. Escape also features the great Ricardo Montalban in a supporting role as one of their few allies by the end.

Montalban is back in Conquest of the Planet of the Apes (1972), which probably reminds me most of what Rise and then Dawn were going for. It’s okay. It flashes forward to the futuristic 1990’s, which looks a lot like the Century City office complex in Los Angeles, and it gets grim pretty quick. In this world all cats and dogs have died in a plague, so humans adopt apes as pets, which turns into them becoming slaves, and yeah it only gets better from there.

Battle for the Planet of the Apes (1973) was an attempt to wrap it all up. Apes vs the last of the humans (as well as some “good” humans helping the apes) in an all out war. And there’s some “ape must not kill ape” civil war stuff, but unlike the last four Apes movies, it somehow has a happy ending with apes and humans living together in harmony despite trying to lead up into the timeline of the beginning of the first Apes movie. Also it’s super low budget, so the climactic final battle is like a couple of jeeps driving through light squibs and lame fireworks.

By the time we get to Tim Burton’s Marky Mark star vehicle remake of Planet of the Apes in 2001, makeup and f/x technology had caught up to the point that the apes look f-ing amazing! The story, on the other hand, not so much. And the less said about the confusing and unnecessary twist ending the better.

1 thought on “Movie Mondays – Planet of the Apes”