Welcome to Movie Mondays, where I visit a movie that has somehow eluded me until now. This week, I’m going to talk about the best car chase in the history of cinema… until The French Connection came along, that is. That’s right, let’s talk about Bullitt! 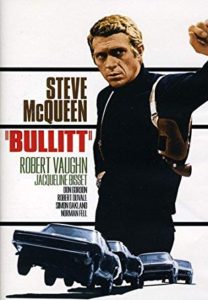 Bullitt is a cop/crime thriller starring Steve McQueen that came out in 1968, so I think it’s only fair to attempt to look at this film through that lens. And from that perspective, I think if I saw this movie when it came out, before being aware of the subsequent 50 years of action movies, gritty crime thrillers, high-octane car chases, before The Fast and the Furious, before Speed, before The French Connection, before last half century of cinematic language evolving and refining, I think this movie and especially the car chase which it is famous for would have blown me away. But who am I kidding? I’m too old for that. Movies are too old for that. As it is, I just enjoyed it.

The story itself is simple enough, and I appreciate a good clear story. Police Lieutenant Frank Bullitt (McQueen) is tasked with babysitting a mob informer, but somebody on the inside give away his location, breaks into the safe house (a not-so-safe hotel room) and guns him down. Bullitt then has to get to the bottom of it while covering up the details to flush out the perps because no one can be trusted.

The movie is filled with tons of great character actors of the time. Robert Vaughn is the senator who first pressures Bullitt to take the job and then pressures him even more to reveal the whereabouts of the hidden and deceased informant, and he is very Robert Vaughn in this. Bullitt is apparently a famous cop, which is why the senator wants him, but that’s an interesting backstory that’s just given to “He has the best team in the business!” and I’m assuming there’s a whole series of Frank Bullitt books this must have been based on. Robert Duvall even has a small role as a cab driver who drove around the informant at the beginning of the movie and helps Bullitt piece things together. Because he’s Robert Duvall, he brings way more to the role than it needs.

Bullitt also has a girlfriend (or wife maybe? I don’t know) whose name I can’t remember and am not even sure was spoken in the movie. She’s played by Jacqueline Bisset and is basically a sexy lamp. All due respect to Ms. Bisset, this is unfortunately just the role she was given. She exists just to show Bullitt has some sort of “human” side to him beside the job, which I guess is good, but it’s not like this is an epic crime thriller like Heat with an investigation that goes on for weeks or months or even Seven where the cops have to grapple with some serious moral questions about their job and lifestyle. And this is one if my problems with the movie (other than some hilariously dated stuff that we’ll get to)—they have all of 2 and a half scenes together, and it basically comes down to her calling him out for being a cold-hearted bastard because he doesn’t even flinch at a gruesome murder, even though he’s a pretty put together and dedicated guy and that’s his job. Then, at the very end, when Bullitt is forced to kill a man who was running through an airport with a gun (more on this later), he goes home to the sexy lamp and breaks down, I guess to show he has human feelings after all.

This is where the dated stuff comes in. It’s trying to show how the strain of the job really does get to him while he has to put up this cold calculating exterior just to do the job, but again after 50 years of these stories, we’ve seen cops struggle with way worse than becoming a little desensitized to the violence they see on a daily basis. There are more dramatic examples of this in Law & Order. And that’s not to say this isn’t a good theme, but the movie dedicates so little time to his “home life” story, it doesn’t really matter until that last shot of him breaking down. The entire subplot could’ve been removed and not changed the story at all, and honestly, it would’ve made for a cleaner movie.

But before we get into the really dated stuff, let’s talk about that car chase. It is indeed awesome. Honestly, it holds up pretty well. I have heard many an interview with film historians and filmmakers alike, including director William Friedkin that he directed the car chasing the el-train sequence in The French Connection intending to top the chase in Bullitt, specifically by saying the chase in Bullitt was too clean, over empty streets and had no obstacles. I was pleasantly surprised how much they all seemed to be over exaggerated. I mean, when Bullitt is chasing the bad guys around the streets of San Francisco, sure there’s only a couple other cars they have to get around, and sometimes there’s cross traffic and sometimes there isn’t, but the pacing of the shots and editing is still exciting. It’s not Michael Bay’s The Rock, but it’s also not that clean of a chase. It was probably the best they could do at the time and still be safe (and not spend half their budget shutting down San Francisco), but it’s still very effective, and I was into it the whole way, until the obligatory “and then the bad guys lose control and cash into an oil service station and blow up, leaving Bullitt with zero evidence” end, but that also showed the limitations in the effects they could pull off.

Did I mention the guy at the gun in the airport? Okay, to back up, through his investigation, Frank Bullitt figures out that the informant who was killed wasn’t really the informant. The real informant paid this guy off to take his place because he was too afraid of the mob (in this movie, they call it “the organization” for some reason, which also feels dated), and so the ringer got killed while the real informant booked a flight out of the country. Bullitt figures out which flight and takes his partner to the airport to find him. Of course, he doesn’t know what he really looks like, so there’s a tense sequence of them looking through a sea of suspicious looking people, including a bunch of cleverly placed priests, as they entered the gate from the boarding area. They couldn’t just ask the ticket agent what seat he’s on because he hasn’t checked in yet (the fight leaves in 15 minutes!) and he might just check in at the gate (um, what?!). Wondering if they’ve missed him, Bullitt calls the ticket counter again to ask about the passenger and apparently he booked a last minute flight somewhere else, so Bullitt makes them stop and deboard the plane while he gets on and tries to snuff the guy out.

And then… and then, as Bullitt is pushing his way through the passengers trying to deboard, the real informant, who is sitting in the back, obviously recognizes him as a cop and panics. Now, I know what you’re thinking. The guys is trapped and either the gig is up or there’s about to be an incident on the plane. Nope! The guy books it past the unaware stewardess and jumps out the back door of the plane. Just. Like. That.

And then… and then… and THEN… Police Lieutenant Frank Bullitt, the best cop in town, chases his quarry around the tarmac and surrounding runways for like ten minutes without a single alarm sounding that an unauthorized person and potential criminal threat is just running around out amongst the passenger loaded planes. Oh, and did I mention the guy has a gun? Yeah, at one point, Bullitt loses him (because it’s night) and the real informant (let’s just call him the bad guy now) takes a shot at him while he has cover. Yeah, somehow this guy got a gun on a plane. Because it’s 1968, and I guess that was totally fine back then?

But wait. There’s more. Again, having seen my fair share of the last 50 years of movies, I figure I know where this is heading, and that there’s gonna be a showdown in the dark in the airfield as occasional planes and flashing lights pass, like how the climax of Heat goes down. Because surely all the bad guy needs to do at this point is kill Bullitt or, if not, elude him long enough to escape into the night never to be seen again. But that is not how it goes down. Oh no. The bad guy then runs back into the airport! He literally just runs back to the gates and walks through a not at all secure door that takes him back into the terminal. It was literally harder for Humphrey Bogart to get Ingrid Bergman and Paul Henreid to the airport in Casablanca!

The thing is, I totally believe that this was the level of security at airports in the 60’s, but on the other hand I watched this like, “What? There is no security at all?!”

Anyway, Bullitt follows the bad guy back into the terminal where he tries to escape in the crowd. He gets held up in another boarding line, which was going outside, so I’m assuming it was for buses. Bullitt catches up to him, at which point he panics, tries to make a break for it while waving a gun around in a terminal and only now are other cops called to get involved. The bad guy pushes through the crowd to the exit, where he’s stopped by a transit cop, who he immediately shoots and kills! Everybody screams. He turns on Bullitt, who then has an instant to react and shoots and kills him before anyone else is hurt. But an entire airport terminal of travelers saw someone get shot, so somehow this is what breaks Bullitt at the end. And Bullitt’s reaction seeing all the horrified travellers actually works. He didn’t want to kill the guy. He was only trying to bring him in. But it’s an interesting moment, and I think McQueen pulls it off. It’s only when he later goes home and breaks down over it that it feels unnecessary.

Overall, I still think Bullitt is an enjoyable movie. It certainly has a great car chase, and as baffling at that climactic chase around the airport is to modern sensibilities, it still kinda works. Honestly, the movie is worth checking out alone for the car chase and to gawk at what passed for airport security in 1968. It’s still dated. But then, I wonder if we were to check out Heat for the first time in 2045, how dated that might feel.